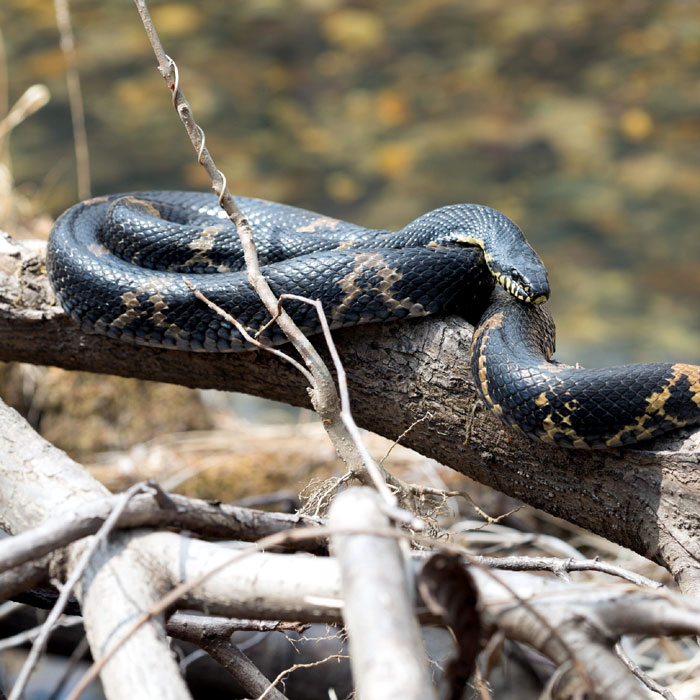 Whether you like snakes or you’re deadly afraid of them, you most likely don’t want them entering your home or yard—especially if you have children and pets—and when it comes to removing them, it’s best to leave it to the Columbia snake removal experts.

While most snakes in SC are not venomous and bites are relatively rare, there are 4 common snakes of South Carolina that are venomous, and 3 out of those 4 are deadly enough to kill a human.

Highly venomous—feeds on lizards, frogs, and smaller snakes—typically secretive and docile but full envenomation (secretion of venom during a bite) is enough to kill 5 adults. This is one creature we take a lot of precautions with during our Columbia snake removal services.

One of the most dangerous rattlesnakes in the Americas—shelters in tunnels and holes, emerging in the early morning or afternoon—disposition varies (some will approach silently while others rattle furiously from 20-30 ft away).

Although typically shy and docile, this creature’s abnormally long fangs and high venom yield make it one of the most potentially lethal snakes in North America.

While venomous, these snakes are generally docile and bites are rarely fatal—they typically “freeze” when frightened—most bites happen because people unwittingly get too close to them.

Do not, under any circumstances, poke, annoy, or try to handle these snakes—leave these venomous predators to the Columbia snake removal experts.

There are of course many other snakes in Columbia, most of which are essentially harmless in terms of venom but still present problems like disease, parasites, skin infections, stealing chicken eggs, and terrifying your pets and children.

We’ll take care of ’em so you don’t have to.

At the end of the day, it’s better to leave it to the Columbia snake removal experts.

That’s A Lot Of Work, But It’s Our Full-Time Job—Backed With A Lifetime Guarantee

Columbia snake removal, like all wildlife removal, is something best left to the professionals—not only for your own safety, but for the efficiency of the job itself.

Don’t waste your time and hard-earned money for a temporary solution to a chronic and invasive problem, risking disease and, at worst, a venomous bite that could land you in the hospital or an early grave.

Wild Thingz provides Snake removal services near Columbia SC- North, Southeast, West, or Downtown areas. Our snake trappers will arrive in minutes to remove snakes of any type or size off your property.

Snakes are strange and hard to predict, Our expert snake handlers are well-trained to handle any of the 38 species of snakes in South Carolina. Don’t risk yourself to venomous snakes. Leave the job of wildlife control in Columbia SC to Wildthingz snake trappers.